Home Animals Dog Is So Excited To Show Mom The 'Art Project' He Did...
Animals 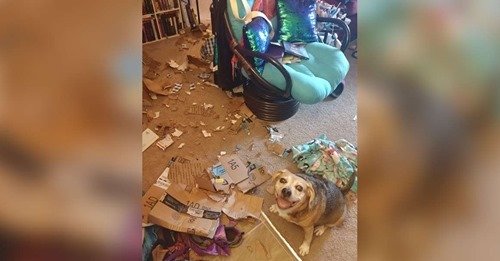 On her first day volunteering at the Norfolk SPCA in Virginia, Casey Lewis knew she wanted to adopt a dog, but was planning to wait until the moment was right. Then the volunteer coordinator introduced her to J.J. — and the adoption was official by the end of the day.

“It was love at first sight, and he came home with me that day … the SPCA still tells our story,” Lewis told The Dodo.

J.J. has been with his mom for over three years now, and in that time, he’s definitely caused a lot of trouble. He has very strong opinions about everything, and loves to get into things he shouldn’t.

“Last year he destroyed six boxes of tissues, tore down the baby gate for the first time, and got into the steel, pedal-operated trash can … cleanup took over an hour … But I love him, and I wouldn’t trade him for anything,” Lewis said.

Recently, Lewis had to go into work but couldn’t bring J.J. to doggy day care that day. She decided he’d be fine at home alone, and secured anything she thought he might be able to get into. She went off to work with her fingers crossed — and came home again to find that her hopes had been in vain.

“What I found when I got home was a MESS,” Lewis said. “He’d torn six boxes into shreds of various sizes, from recognizable to fingernail-sized. He’d also pulled down the wooden baby gate in the kitchen and managed to move the storage tower that held it in place, and a large chunk had broken off an already-broken corner of the gate. I was lucky he didn’t decide to go for the trash.”

As Lewis observed the mess she now had to clean up, J.J. stood there proudly with the biggest smile on his face. He was clearly so excited to show his mom the art project he’d completed while she was gone, and couldn’t have been more pleased with himself.

“He’s always proud of his messes — ‘guilty beagle’ is an oxymoron,” Lewis said.

Much to J.J.’s dismay, Lewis cleaned up the mess he made that day, knowing there are bound to be many more in the future. J.J. just loves to explore and express himself, and even though it’s messy sometimes, his mom wouldn’t have him any other way.

Loyal Dog Stands Outside Hospital For Days Waiting For His Dad

For the past week, a dog named Boncuk has been Medical Park Trabzon Karadeniz Hospital’s most frequent visitor. The little white dog arrives every morning...
Read more
Animals

I’m sure we’ve all come across animals that have made us turn our heads and have a second look, but have you ever seen...
Read more
Animals

KK and Sauce are both 5 years old and have been best friends since the very beginning. They do everything together, and KK definitely...
Read more