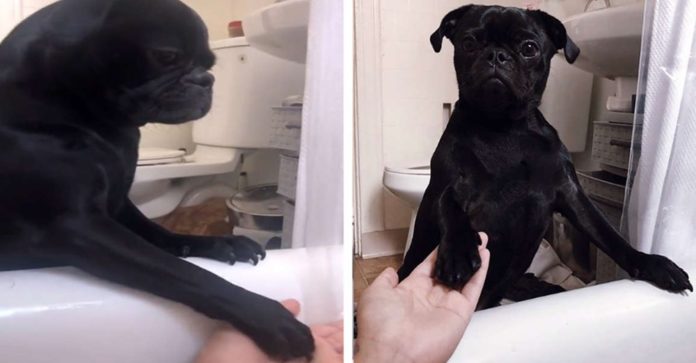 Diego hates the bathroom. And he can’t imagine that anyone could feel any different.

“He screams like he’s being murdered when he bathes,” Raphi Muñoz, Diego’s owner, told the Dodo.

Muñoz, on the other hand, loves to take a hot bath – a fact that Diego has never been able to wrap his little head around.

“He’s always hated when I take baths and he would scream cry the whole time,” Muñoz said.

Believing her to be suffering like he does during those soapy “ordeals,” Diego insists on giving Muñoz his moral support.

“He started offering me a paw,” Muñoz said.

On Duty Pug anyone? I don’t know why he does this he cries if I don’t hold his paw ##fyp ##foryou ##BaseballSzn ##pugsoftiktok ##blackpug ##fypシ

The thoughtful pup clearly would prefer to be far from the evil bath, but he sticks by anyway — all so his mom doesn’t have to face it alone.

“It’s very heroic and noble of him!” Muñoz said. “He’s pretty protective of me so I wouldn’t expect anything less from him.”

Diego’s concerns for Muñoz during her bath times may be more than a little misguided, but his heart is certainly in the right place — and in the end, that’s what matters most.