Home Animals Sneaky Cat Steals The Weirdest Things From Her Neighbors To 'Gift' To...
Animals 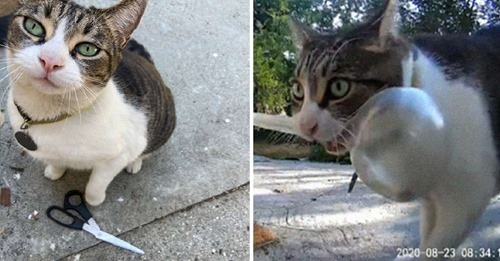 When Mónica Vicéns’ friend told her about three tiny kittens abandoned in her backyard, Vicéns couldn’t say no to fostering them. She quickly fell in love with the smallest of the bunch, a little white and brown tabby, and knew she couldn’t stand to part with her.

“China was the only girl and the runt of the three,” Vicéns told The Dodo. “I already had a 4-month-old male kitten named Waffles from that same yard and had fallen in love with China, so I decided to keep her.”

A few months later, Vicéns moved to a home with a large backyard, and the scrawny kitten transformed into a fierce huntress.

“It got to the point that we had to keep all the doors and windows closed making sure she wasn’t able to get out because she always snuck in with some live creature in her mouth,” Vicéns said. “She would get up every morning as if it was her job to go out there and provide for the family.”

Vicéns didn’t like all the bugs that China gifted her each day, and made that clear to her cat by stopping her from going outside. But China still wanted to bring her mom something, so she turned her attention to inside the house.

Vicéns began to find piles of her roommate’s socks outside her door. At first, she thought her roommate’s dog was bringing them to her, but eventually, they caught China red-handed. “She was making some weird meows so we slowly peeked around the corner and saw her dropping the sock by my door,” Vicéns said. “It was the funniest thing we had seen!”

Eventually, China found her way outside again, but to her mom’s relief, she began to turn up with objects as gifts — instead of live ones.