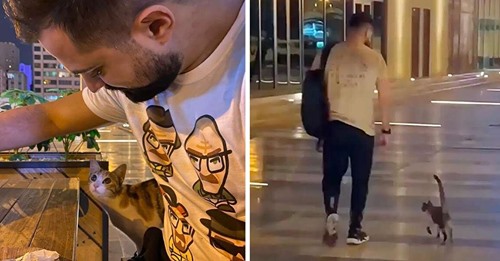 Most days, you can find Basil Akwan working on his laptop at a local café in Kuwait. He and his girlfriend enjoy the hustle and bustle of spending time outside, and they weren’t the only ones.

Two little stray kitten sisters also enjoyed the café, with its comfy chairs for napping and an awning to protect them from the sun and rain.

And it didn’t take long for the kittens to discover that fellow regulars Akwan and his girlfriend were pushovers when it came to handing out treats.

“We used to see them together all the time — they always waited in the same spot for us to come, even on rainy days,” Akwan told The Dodo. “They would sneak on the table for food and cuddles.”

One of the strays, named Sophie, became particularly attached to Akwan and started following him to his car. It was clear she wanted to come home with him, and even hopped inside whenever he let her.

Akwan couldn’t stand to leave her behind, so he decided to rescue Sophie, and his girlfriend took her kitten sister.

Four months after Sophie followed Akwan to his car, the two are now perfectly in sync. “She’s extremely playful,” Akwan said. “I get her toys all the time, and the best part is that she’s adjusted to my habits, like sleeping.”

Sophie is now the last thing Akwan sees at night and the first thing he sees in the morning. And while he may have rescued her, Akwan is glad every day that Sophie chose him to be her dad.

“It’s such a rewarding relationship,” Akwan said. “Having such an unconditional love is priceless, and knowing that I am going back every day to this little fluff makes my days better.”

Tiniest Bird Uses A Flower Petal As Her Bathtub