This Cafe Opens Its Doors to Stray Dogs Every Night 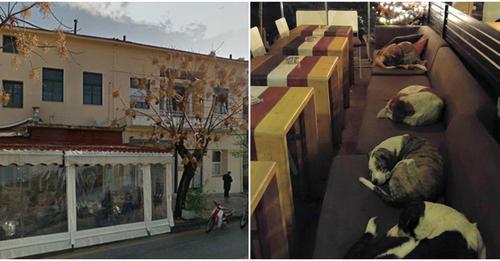 And customers wouldn’t have it any other way.

In Greece, there is a café that serves coffee by day and offers a warm shelter to stray dogs at night. This dog-friendly place is called Hott Spott and is located on the island of Lesbos. It helps make life a little better for more than a million homeless dogs in the country (according to Greek charities).

It all started last July when, according to a waiter who works at the cafe, the establishment started inviting its nighttime residents inside around 3 a.m., long after the last customers had left. And no, it didn’t affect their business. In fact, the cafe became even more popular because of their puppy project.

But why are there so many stray dogs? For one thing, the debt crisis has meant that some owners can no longer afford to feed their pets. But another reason is the international refugee crisis.

Eustratios Papanis, the man who posted the photo that went viral on Facebook of the dogs sleeping in the cafe, explained the impact that refugees have had on Lesbos (which is located near the coast of Turkey), “More than 700,000 refugees from Syria and other Middle Eastern countries have entered Europe from this island this year and the solidarity towards humans and animals was remarkable.”

He says the new generation of residents are more sensitive and knowledgeable, which leads to efforts like this to come together and make the community even better.