HomeAnimalsDumped Pitbull Puppy Adopted By The Firefighter Who Saved Her
Animals 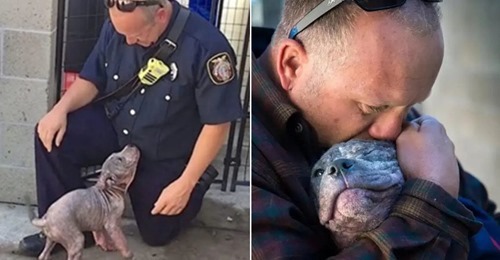 Rescued strays always remember the kind people who saved them from a miserable life on the streets. At first, things didn’t look very bright for Chunk. The puppy was badly neglected and eventually dumped and tied to a tree. Gladly he was spotted hours later by just the right people. The young Pitbull was saved and eventually adopted by the same firefighter who rescued her.

It was a freezing October night when beautiful Chunk was dumped after months of neglect and abuse. She was covered in mange and shivering in the cold. Luckily a group of Sacramento firefighters passed Chunk on the way to answer a call. They couldn’t stop to help the poor pooch at the time, but firefighter Mike Thawley couldn’t get the image of the helpless puppy out of his mind. After responding to the call, Thawley insisted they’d go back and check on the pooch. Chunk was still there tied to the same tree, so the firefighters picked her up and brought her back to the station with them.

The compassionate firefighters nurtured the poor pup. She had swollen legs, mange, but more than anything else, she was longing for affection. Despite their kind hearts, the firefighters were definitely no vets, and the pooch seriously needed to see one.

The next morning the men dropped Chunk off at the Front Street Animal Shelter, to receive the treatment she needed so badly. The staff immediately treated her mange and dressed her in a shirt to keep her nice and warm until her fur grows back. Thawley, who evidently had a strong connection with Chunk, couldn’t get her out of his mind. He visited her the next day, and it was clear to everyone who saw their reunion that Chunk was very grateful for everything he’d done for her. She climbed him, kissed him, and wagged her tail continuously.

The two had such a good time together, that Thawley brought his family to meet Chunk the following day. The Sacramento Fire Department had something to say about that: “Although Mike denies it, it appears by a vote of four to one that Chunk might wind up with a permanent home!” they later posted on Facebook. It may have been the result of good intuition, or possibly witchcraft but that post predicted the future. Within a few days of meeting her, the adorable Pitbull was adopted by the firefighter and his family. They were so determined to give her a home, that they had to wait for four months until she’d finish her comprehensive mange treatment.

Bobby Mann, Front Street Animal Shelter spokesperson commented on Chunk’s story saying: “I think what’s great about this whole story is that not only did this dog find its forever home, but had the opportunity to go to a foster home, which we’re always looking for at our shelter, to get happy and healthy.”

Watch the adorable moment Thawley visits the lonely Pitbull at the shelter: