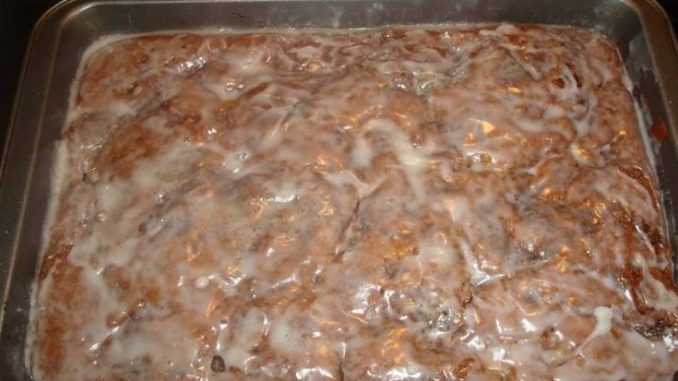 For the filling: Make your filling by combining apples, sugar, water, cinnamon and corn starch in a small saucepan. Simmer for 5 to 7 minutes, stirring constantly until the sauce thickens and the apples are a little soft. Let them cool. In a small bowl, mix the brown sugar and cinnamon until well combined and set aside.

For the cake: Preheat the oven to 350°. Grease and flour a 9×13 baking dish. Set aside.
Cream butter and sugar until light and fluffy, about 3 minutes. Add the applesauce and vanilla and mix until combined. Add the eggs, one by one, beating well after each addition.
Close the dry ingredients together. Add the dry ingredients to the dough in three parts, alternating with the yogurt in two parts, starting and ending with the dry ingredients. Beat until well combined.
Place half of the dough on the prepared tray. Place the cooled apple mixture on the dough carefully and spread it as evenly as possible. Sprinkle 2/3 of the brown sugar and cinnamon mixture over the apples and cover them with the rest of the dough. Sprinkle the rest of the brown sugar and cinnamon mixture over the top.
Bake for 45-55 minutes, until a toothpick inserted in the center of the cake comes out clean.
For the icing: While baking the cake, make the icing. In a bowl, mix the powdered sugar, vanilla and milk until the glaze is the desired consistency. When the cake comes out of the oven, immediately but carefully, pour it over the hot cake. Try to pour it as evenly as possible. You may have to take the cake and tilt it to spread the icing evenly. I even poured a little bit that accumulated in the corners and I saw it again on top. Let the cake settle for a while so that the icing sets

Christmas chocolate truffles are fast, easy and so good that you will be proud to take them to any Christmas party. Ingredients Semi-sweet chocolate chips 3...
Read more
RECIPES

Reindeer rice cakes are nice, festive and easy to make… a fun vacation project for the kids and a delicious gift to share with...
Read more

The Christmas Cactus is a beautiful plant that produces bright, delicate blooms during the holiday season. It’s not just a seasonal plant, however. Many...
Read more

Rescued strays always remember the kind people who saved them from a miserable life on the streets. At first, things didn’t look very bright for Chunk....
Read more