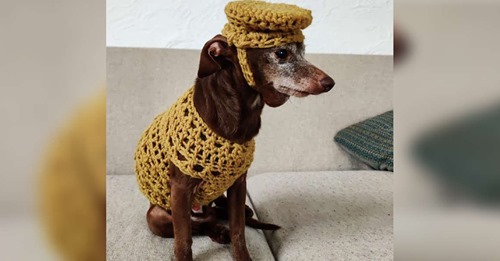 In November, with the weather getting colder in Minnesota, Nick Greatens and his partner found themselves stuck inside a whole lot more. To pass the time, they decided to try two new pandemic hobbies — fostering dogs and learning how to crochet. Little did Greatens know that soon these hobbies would go hand in hand.

Greatens and his partner took in two bonded senior foster Chihuahuas, Agnarr and Yelena, from Ruff Start Rescue. The two Chihuahuas had come from a hoarding situation and didn’t trust their new humans.

“At first, they were extremely shy and we could barely touch them, but after a couple of days they opened up,” Greatens told The Dodo. “Now they can’t get enough cuddles.”

Agnarr was especially anxious, but as the weeks passed, he and Greatens started to bond. “Agnarr would like to be touching me every minute of every day,” Greatens said. “We’ve grown very close.”

Greatens knew the bonded pair would have trouble getting adopted. Not only were they older, but they had to go to a home together. “They’re emotionally interdependent,” Greatens said. “They spend most of the day cuddling with each other and napping on the sofa.”

“Yelena is a quiet old lady who just wants to sleep,” he said. “Agnarr is a cantankerous old man who likes to defend his turf, but he only weighs 7 pounds and has one good tooth. Not too scary.”

As Greatens’ bond with the dogs improved, so did his crocheting skills. Greatens practiced crocheting during his work meetings as a way to keep his hands busy and mind clear, but he wasn’t ready to commit to a big project just yet.

“I’m too impatient to make a human sweater for now,” Greatens said. “So the natural first step was to make tiny sweaters for the rescue Chihuahuas.”