HomeAnimalsGuy Brings Dog To His New Girlfriend's House And He Decides To...
Animals 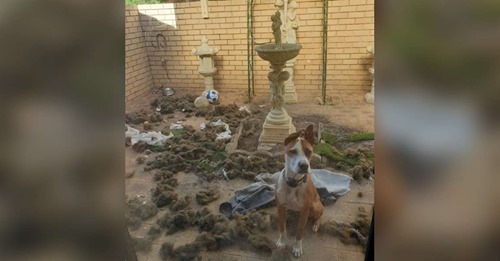 Dasher was rescued when he was just a tiny puppy, and at first, he was very calm — but that didn’t last. Now, he’s a great big ball of energy who likes to make his presence very known anywhere he goes.

“Anything he finds he will eat it,” Tiffany Pond, Dash’s mom, told The Dodo. “Washing on the line? Yes please! Leather couch? Why not. His own bed? You bet … Nothing is off-limits with Dashy. He is like a toddler on steroids, can’t even leave a glass of water on the coffee table in case his enthusiastic tail wags knock it off.”

When Pond first started dating Dasher’s dad, the couple made sure to introduce Dasher and Pond’s dog, Charlie, very slowly to set the relationship up for success as much as possible. Dasher is still very much a puppy and Charlie is on the older side, so they weren’t sure exactly how it would work out. So far, though, it’s been going pretty well.

When Dasher came over to Pond’s house for the first time, they didn’t want him to overwhelm Charlie too much in his own space, so they decided to have him hang out in Pond’s little courtyard area for a while.

“I have a courtyard leading out from my bedroom and it’s fairly bare at the moment, haven’t really done anything with the space, does have a gorgeous water feature with some fake grass surrounding it and a few lovely statues though,” Pond said. “I thought it would be perfect for Dashy while he settles in because he can be a little crazy inside in new environments and in my mind I reasoned that there was nothing he could possibly wreck or ruin out there! It’s all brick or statue, good luck gnashing on that Dash ha!”

The couple put Dash in the courtyard with his bed and let him be for a bit. They figured he couldn’t get into much trouble out there — but of course, they were wrong.