HomeAnimalsShelter Dog Hugs Her Best Friend Hours Before Euthanasia And Saves Their...
Animals 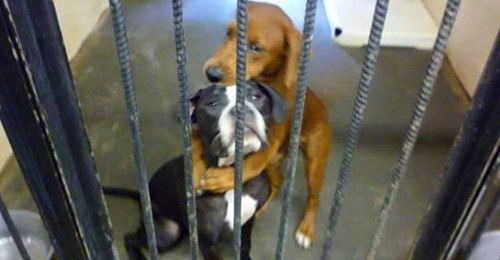 It’s remarkable how a single photograph has the power to change lives, like the way it did for two shelter dogs. In 2015, Kala and Keira found themselves bunking together as shelter-mates — and with nothing but each other, they soon became joint at the hip.

They were absolutely rooted to one another, heart and soul. Tragically, the two had been staying in a kill-shelter and their time was rapidly running out. That’s when, with a quick snap of the camera, everything began to change and the two got a second shot at life.

The two were located at the Etowah County Humane Society, and they had been scheduled to be put down the following day when staff decided to snap a picture and post one final plea for these pups’ lives to their social media page.

The two shelter puppies caught the eye of Angels Among Us Pet Rescue, who were told by the shelter that the two frightened friends had sadly reached their “deadline”, quite literally. It was their last day, and they were scheduled to be euthanized.

With time quickly running out, the rescue center re-shared the viral photo with a caption that told readers about their heartbreaking story from the perspective of Kala in an emotionally-geared effort to rescue the two shelter dogs from death row, it reads;

As the post continues, the rescue center desperately begs for help.

The heart-wrenching post went viral within minutes and, according to Angels Among Us, it only took exactly 2 hours and 6 minutes from the time their story was posted to the time they were walking away from certain death. A gentleman that saw the picture on the rescue’s page immediately called the rescue and said he was on his way to pick them up.

Unfortunately, though, he could only foster the relieved shelter dogs until a forever home could be found, so their trials were getting easier, but they certainly weren’t over.

Tiniest Bird Uses A Flower Petal As Her Bathtub